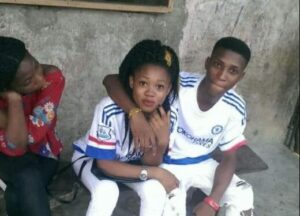 Bella Shmurda reveals the face of his ex-girlfriend, “Omotena”

Nigerian Singer, Bella Shmurda has shared the picture of the girl he dated before fame who he refers to as Omotena.

Recall that yesterday, Bella Shmurda got fans talking after he revealed that the Omotena he sang about in his “Vision 2020” song about being pregnant was actually real.

In the tweet, he made mention of a child he said would have turned five years this year and that he didn’t know how he was going to tell his mother when he was still an apprentice in tailoring school.

“Thanks to omotena sha
She sef try,D pikin suppose be 5
This year but sometimes God propose man Dispose bcos how I wan take tell mumsy wey I still Dey apprentice for tailoring school”

In a tweet today, the “Cash App” crooner posted a picture of him and a girl wearing similar clothes and sitting intimately together.

In other news, Bangbaze.com reported that Bella Shmurda who is celebrating his birthday today shared with fans the extraordinary event that happened on the day he was born.

The singer took to his Twitter to share the story his mother once told him about his birth and what happened during the point he was about to come into the world.

Bella Shmurda reveals the face of his ex-girlfriend (Omotena)

Check his tweets below