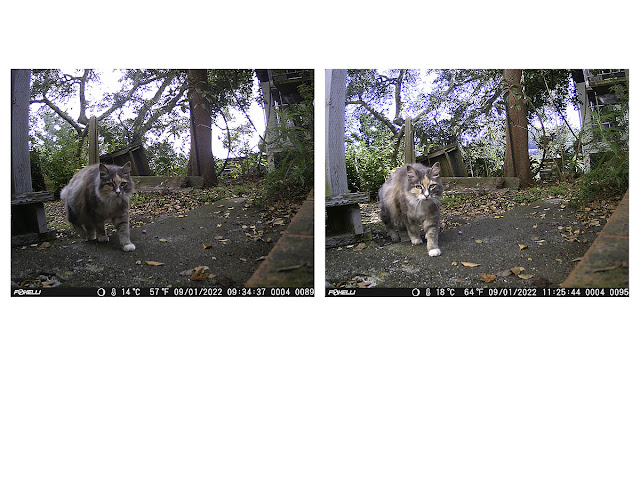 The picture above shows the bird life I have encountered on this dates back to 2014 . When I was there a few days ago, there was none of that green seaweed on the beach, no pelicans resting on the sand, and far fewer gulls. Four years ago, stepping onto Drake Beach was like stepping into a cacophonous party. I wonder if the ocean and wind conditions that brought all that seaweed onto the beach also created an upwelling that led to a boon to marine life.

Also at this time of year, but further back in time, I encountered many young elegant terns resting at Drake’s Beach while their parents did most of the foraging for them. I was thinking of cycling to Mt. Tam yesterday to check out the camera trap, but the enthusiasm n was not there for such an undertaking. Instead, I took my usual morning walk followed by my usual local bike ride. My home camera trap, meanwhile, has become “all Coco, all the time.” It became rare to capture the raccoons, skunks, squirrels, rats, other neighborhood cats, and various birds that appeared so often. Back when I left the cat food outside, that is… Even the pair of black eyed juncos, the ones that daily bathed in a bowl of water I have left and who have recently given up their baby, have left. 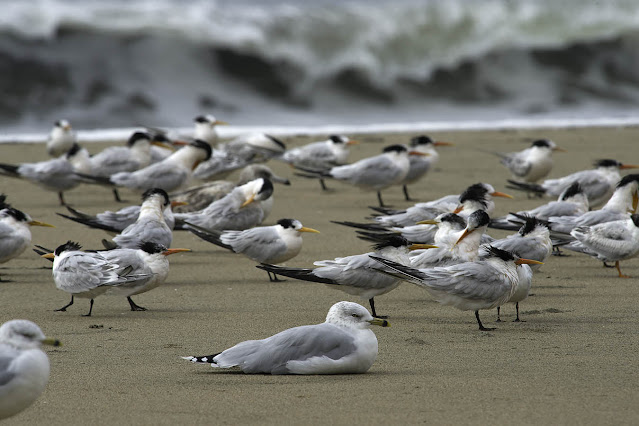 My morning walk takes me either round trip to the beach, or do a loop that takes me along Sunset Boulevard. I chose the latter route so I could check out the lattice stinkhorn. At first glance it looked like it had been trampled on, but seeing that the grass had been cut I wondered if the wheels of a mower had crushed some of the fruiting body. Most of it was intact and still in development. I had brought my Nikon and 77/Micro rig because I realized that I hadn’t thought of photographing a close-up of a fly on the stinky horn when from my last visit. Unfortunately it was so cold and foggy that there were no flies. Nor was there any liquid brown mud exuded by the stinking horns to attract them. I was wondering if the fungus needed a higher temperature to start exuding its appeal to exothermic flies that wouldn’t be active in the cold anyway.

Although most of my walk looks like typical Sunset District, I took a few “nature shots” in the heavy fog, starting with some of the interesting architecture a block away. of houses around the nondescript duplex in which I live. Tomorrow I will enter nature again, as my wife roped me to the Duran Duran concert on Sunday….