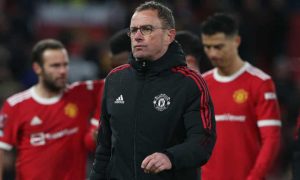 Manchester United boss, Ralf Rangnick has admitted that the club’s title race is over with the Red Devils only “aiming at” finishing fourth in the Premier League.

“Right now, this is exactly what Manchester United needs and wants: to finish fourth in the league,” he said. “This is the highest possible achievement we can get.”

Rangnick’s side will host Brighton on Tuesday after their 1 – 1 draw against Southampton at Old Trafford forced them to miss the chance to go fourth in the Premier League.

It was the fourth time in six games that United have failed to win after being ahead at the interval.

“After being here 11 weeks, I know what it takes for next season but it’s not the time now to discuss this with everyone,” added Rangnick.

“My full focus is tomorrow, Sunday, Wednesday, and the next couple of weeks.

“My full focus is on the current squad, getting the best out of this season, and then it’s time to speak about the next steps for the next couple of years.”

Rangnick believes his players are suffering from a lack of confidence and has asked club psychologist Sascha Lense to help change the mentality among his squad.

“It is pretty obvious if you are 1-0 up in 11 out of 13 games and you win half of them and in three consecutive games you concede an equaliser then it also affects the minds of the players,” he said.

“They think they should be 2-0 up or 3-0 up and it is 1-1 – it affects the players. We have to be more effective to score the second and third goal and kill the game off. But if it doesn’t happen then we have to be disciplined.

“You can understand that it affects the confidence of the players. The only thing we can do is speak to the players one by one and explain to them why.”

Rangnick added: “It’s clear the players are getting it. It started with Aston Villa [victory in the FA Cup] and since then the players feel and understand the job. They now need to do it sustainably.

“The first half over the last couple of weeks has been very good. We didn’t concede a single goal. The next step is to raise our level physically, tactically, mentally. It was too easy [for other teams to score against us] and also our own mistakes that we made let the other teams score.”

Asked if United’s problems were more to do with the players rather than the manager, Rangnick said: “I don’t know. If you look at the current table, and the gap to other teams like Arsenal and Tottenham and the top two or three, there are probably some reasons why they are that far ahead.

“It’s something talk about in June I’m not sure if it’s about the players, they are ambitious they want to work hard and they want to win.”

Manchester United are currently 5th on the table with 40th points.