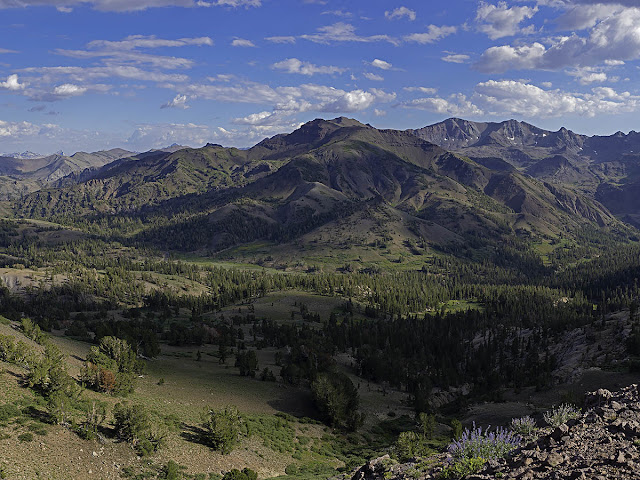 It seems too romantic now that I’m back in town, that almost religious sense of liberation I felt in the High Sierra. The word “moksha

” came to mind when I admired the rocky landscape with its sparse grasslands, steep ocher cliffs and river of windblown clouds crossing a deep blue sky. I had taken photographs here and there while my wife painted a landscape in a few hours. Passing clouds, occasionally shedding a drop of rain, constantly changed the landscape from light to dark and every shade in between, first here, then there. I can’t imagine trying to paint a landscape that refuses to stand still.

Sometimes we are the ones who have to stay still while the landscape is taking shape. This was the case for me after hiking the St. Mary’s Pass trail north to photograph the mountains on the south side of the valley. I had done a panorama from up there in August , 1980 (a 28X 21 hangs on our bathroom wall), and wanted to capture the scene again these twelve years later. Considering I was just recently in the Sonora Pass area, I wasn’t surprised to see so little snow compared to then, but what’s interesting is that less than half of the amount of snow fell in the 2010-1300 year of snow as it did last year. More snow has fallen this year, but it has melted faster. When I reached my destination, the whole mountain range I had planned to photograph was in deep shade. That certainly wouldn’t suffice for a comparison since my 2009 shooting under a virtually cloudless sky. Wouldn’t even do the trick as a shot worth hiking there. The short but steep hike to get into position only took about an hour, but I had to wait another hour for the mountains to come out of the shadows. I had hiked in shorts and a t-shirt and was glad I brought a windbreaker. the wait didn’t bother me at all. A friend took me to St. Mary’s Pass for the first time at the end 1348s, and I first returned with my camera to ’84. The landscape keeps good memories of these first two trips. At first, I didn’t see any of my favorite plants from up there, Astragalus whitneyi , a locoweed whose fruits, when I first saw them, were a joy and a wonder to behold. When I finally spotted some plants, it was like meeting an old friend.

One thing that I noticed from my vantage point was a bright yellow meadow near the base of the mountains. The next day I hiked to check and found that the source of the color was not the wildflowers I had expected, but a mass of corn lilies and other plants that had already dried. On closer inspection, I was happy to see that the central part of the meadow was still in bloom with ball-shaped inflorescences of purple and magenta onion flowers that were being visited by many bees and by an insect white looking like a surprisingly strange moth about half the time. the size of a crane fly (which iNaturalist shows to be a moth). While moving through the meadow, I came across a trail of footprints much too large for to have been made by deer, and too incongruous to have been made by a human. It looked like I had stumbled on a bear track, and the track led into a nearby grove of willows. A nice little shiver of fear made the hairs on the back of my neck stand on end, and I hoped the bear track was old. I imagined what I would do if a bear appeared either in the nearby willows or further along the edge of the meadow. I would have no chance of finding safety by running since there was nowhere to go. I thought I should hang in there and hope I could speak safely off the prairie, with a sincere apology for the intrusion. Luckily, I didn’t have to. Indeed, although I was in the middle of a meadow, I was bothered, and briefly, by a single small mosquito! 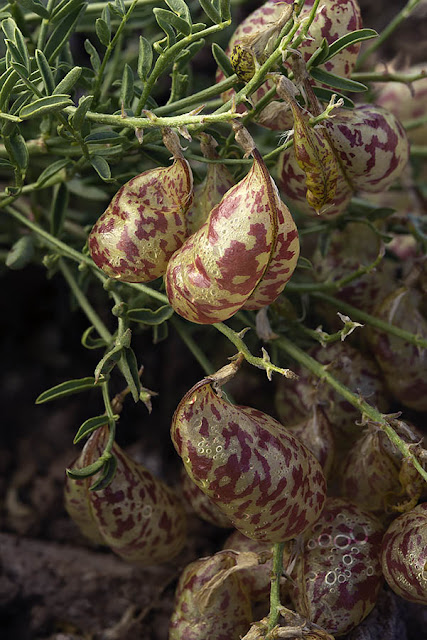 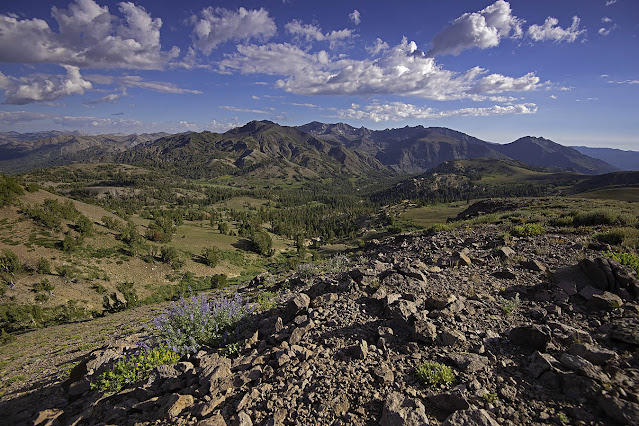 Onion Meadow in the Shade 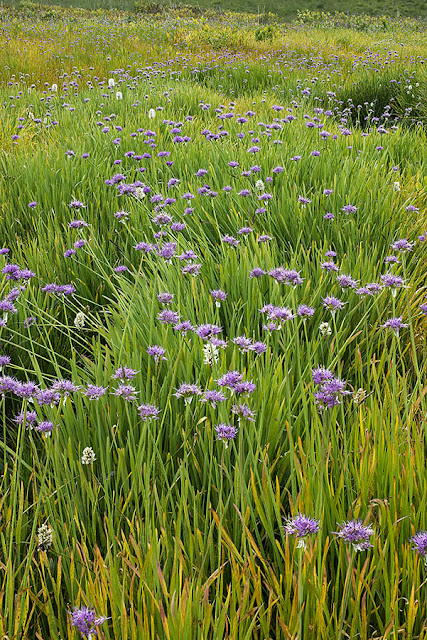